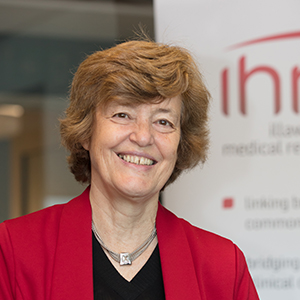 Prof Robin Anderson is Head of the Metastasis Research Laboratory at the Peter MacCallum Cancer Centre and holds an honorary appointment of Principal Fellow in the Sir Peter MacCallum Department of Oncology at The University of Melbourne. Commencing in 2009, she was awarded a career fellowship from the NBCF for continued research in breast cancer metastasis, for which she has had a longstanding interest. Since 1997 her group has developed breast cancer metastasis models, including the only model that mimics the clinical behaviour of breast cancer, with reliable and substantial metastasis to bone. This research has been funded by the US Department of Defense, The Susan G. Komen for the Cure (USA), the NIH/NCI, the NHMRC, The Cancer Council of Victoria, AICR, Cancer Australia and the NBCF.

Expression profiling of tumours with varying metastatic potential within the models has yielded some novel potential metastasis regulating genes that are the subject of on-going studies. She has also developed an interest in tumour/stromal interactions, again using these clinically relevant metastasis models. Her research is well recognised in USA and Europe, as evidenced by many invitations to speak at national and overseas conferences. She reviews for many journals and funding agencies, has been a Grant Review Panel member for the NHMRC and the NBCF, is the Editor-in-Chief of Clinical & Experimental Metastasis, an Editorial Board Member of Cell Stress & Chaperones, a member of the Board of Directors of the International Metastasis Research Society, a member of the Scientific Committee of the Victorian Breast Cancer Research Consortium and on the organising committees of several conferences, including the program committee for the AACR Annual Meeting in Washington, DC in April 2010 and the 14th International congress of the Metastasis research Society in Brisbane in 2012.

Professor Anderson has mentored over 25 honours and PhD students and several postdoctoral fellows who have established or are establishing independent careers in cancer research. She has published 100 original research and review articles, the more recent ones focusing on her metastasis research.